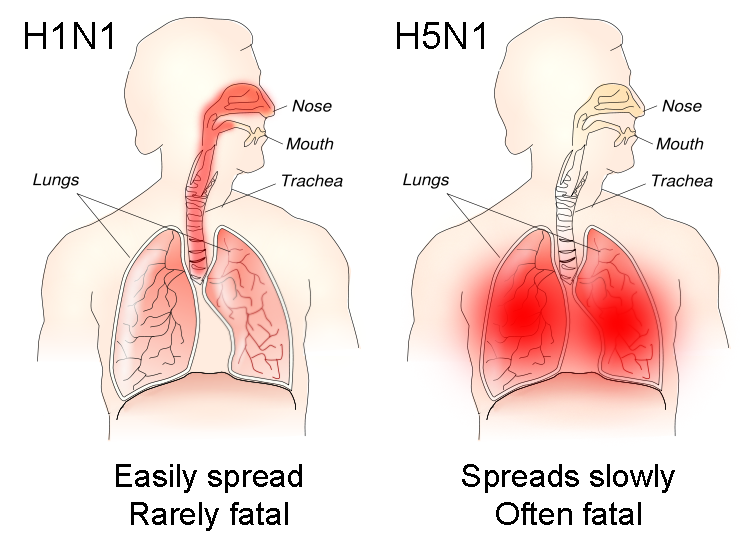 Bird influenza is a disease brought on by a particular kind of bird (bird) influenza virus, the so-called H5N1 infection. This infection was very first found in birds in China in 1997, and since then has contaminated 125 people in Vietnam, Cambodia, Thailand, and Indonesia, killing 64 of them. It is spread out by infected migratory birds (consisting of wild ducks and geese) to domestic poultry (mainly chickens, ducks, and turkeys), and then to humans.

Some infected individuals have developed abnormal clotting profiles resulting in extreme bleeding– which was a regular clinical sign in the lethal so-called Spanish influenza of 1918-19, which killed more than 100 million individuals worldwide. Undoubtedly, bird flu shares a variety of disturbing qualities with the 1918-19 influenza infection. These two infections have, in fact, recently been revealed to be comparable genetically. And in a current laboratory try out mice, the 1918-19 virus was found to produce 39,000 times more viruses 4 days after infection than the routine seasonal human influenza stress. The 1918-19 virus eliminated 100 percent of the mice that were contaminated with it, compared to none of the mice infected with the regular influenza stress. With a present “case death rate,” or death rate of roughly 50 percent in human beings, bird flu is clearly also a really lethal disease.

There are just a couple of reports in the medical literature describing the clinical functions of bird influenza in people. The medical spectrum of H5N1 infection ranges from asymptomatic infection– where the individual doesn’t even understand he or she is infected– to deadly pneumonia and numerous organ failure. Some infected people establish liver or kidney dysfunction, and there were 2 children who died from the virus that came to medical attention due to the fact that of diarrhea and seizures connected to encephalitis (infection of the brain). Nevertheless, the most common presentation is one of fever, cough, and difficulty breathing. Approximately 70 percent of clients also have diarrhea, and a few clients have actually had just gastrointestinal signs (such as stomach pains, throwing up, and diarrhea) and no breathing problems.

Deaths have normally remained in normally healthy individuals. The very first report in the medical literature of deaths from bird influenza was on 12 patients living in Hong Kong. Their typical age was nine years, with a range of one to 60 years. All provided with fever, and eight had signs or indications of upper-respiratory infections (5 had clinical and X-ray evidence of pneumonia when first diagnosed). Intestinal (GI) symptoms, consisting of stomach discomfort, throwing up, and diarrhea, existed in eight clients. There was overall of five deaths (one passed away with Reye’s syndrome, which is connected with taking aspirin in children).

In a study of 10 patients in Vietnam with laboratory-confirmed avian influenza (H5N1), the mean age of the clients was 13.7 years. For eight of the clients, there was a clear history of either direct handling of poultry (chickens or ducks) or direct exposure to sick poultry in the week prior to the start of health problem. All presented in January 2004 with cough, shortness of breath, and fever, and 7 had diarrhea; none had myalgia (muscle pains)– which is often discovered in the routine seasonal flu. Especially, oseltamivir (Tamiflu) was administered to 5 patients, four of whom passed away (treatment was most likely begun too late for the medication to be efficient– it should be given within two days after the start of symptoms to be efficient). In overall, 8 of the patients died, for an 80 percent case death rate or death rate.

As is apparent from the descriptions above, the presenting signs of individuals with bird flu are very comparable to the signs of the typical seasonal influenza. Infections caused by either the bird-flu infection (H5N1) or the seasonal influenza virus can be completely asymptomatic– that is, trigger no signs at all. Fever, cough, despair (feeling ill), and gastrointestinal symptoms prevail to both infections. Excessive bleeding takes place just with bird influenza, but presently this sign does not seem common. Difficulty breathing is more common with severe cases of bird flu, not seasonal flu. Runny nose and sneezing are found just with colds (or allergies).

The cough in either kind of infection is what is referred to in medicine as “nonproductive”– implying there is no sputum raised when coughing, or if any sputum is raised, it is white in color. This kind of cough is characteristic of upper respiratory viral infections. As either type of infection advances or gets worse, tissues may be damaged, interfering with the normal structure and function of the infected cells. This, in turn, might allow germs to grow and likewise trigger damage. When this takes place following a viral infection, it is described as a “secondary” bacterial infection. When this occurs, the color of the sputum characteristically turns yellow or green. If this takes place, antibiotics are indicated to treat bacterial infection. (Antibiotics are not shown in the treatment of viral infections, due to the fact that they do not work.).

It is safe to assume that during a bird-flu pandemic, many individuals who end up being contaminated with the bird-flu infection will either be asymptomatic– having no signs– or their disease will not be severe adequate to require hospitalization. The small percentage who do become seriously ill will have to be hospitalized and treated with either of the 2 antiviral representatives available, oseltamivir (Tamiflu) or zanamivir (Relenza). A smaller sized subset of that group will establish life-threatening issues such as severe breathing distress syndrome (ARDS), which requires treatment with a mechanical ventilator, a respirator.

Some people may develop other major issues such as liver failure, kidney failure, neurological problems– such as seizures, paralysis, psychiatric issues such as delirium or psychosis, or bleeding problems. However, it is affordable to forecast that most people infected with the virus will not die and will not have significant recurring symptoms, although a small percentage will.

How to get rid of the Flu in winter?